In the late 1970s and early 1980s, it seemed that Social Security would soon go broke. The National Commission on Social Security Reform, chaired by Alan Greenspan, was charged with examining the financial future of the Social Security Act and making recommendations to Congress to save the program.

Despite the looming crisis, Republicans and Democrats were locked in a partisan war. In a true demonstration of bipartisanship, Dole teamed up with Democratic Sen. Pat Moynihan to end the stalemate and save Social Security.

Dissention among members of the bipartisan commission escalated as the Social Security finances began to deteriorate. Some members believed the crisis facing Social Security was blown out of proportion; others were divided about how to resolve impending issues–deadlocked on whether to recommend increasing taxes or reducing benefits. After missing its original deadline and forcing President Ronald Reagan to extend the life of the commission, a compromise among a majority of the members was finally reached.

The commission’s negotiations, however, did little to alter the stalemate in Congress that blocked passage of any bill during the remaining months of 1982.

On January 3, 1983, after reading an article on Social Security written by Dole in that morning’s New York Times, Sen. Patrick Moynihan approached Dole on the Senate floor. Together, the two veteran Senators led a last-ditch, bipartisan effort to break the legislative stalemate and save Social Security.

The commission’s original recommendations included taxing Social Security benefits and increasing the age for receiving full benefits. Meeting outside the halls of Congress, the “Gang of Seven” (Dole, Moynihan, three other members of the Greenspan Commission and two Reagan advisors) came up with a timetable of payroll tax increases and spending reforms that legislators of both parties could accept. On April 20, 1983, an appreciative President Ronald Reagan signed the bill into law.

“I have learned in my own life, from my own experience, that not every man, woman or child can make it on their own. And that in time of need, the bridge between failure and success can be the government itself. And given all that I have experienced, I shall always remember those in need. That is why I helped to save Social Security in 1983 and that is why I will be the president who preserves and strengthens and protects Medicare for America’s senior citizens.” 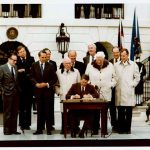 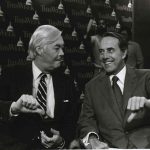