Dole was a strong believer in equality and opportunity. He supported legislation that would contribute to the success of his fellow Americans, regardless of their race, religion, gender or creed. Dole supported both the Civil Rights Act of 1964 and the Voting Rights Act of 1965. Although many of his constituents were opposed to both of these bills, Dole considered them among the most important votes of his political career.

After the election of President Lyndon Johnson in 1964, many civil rights groups called upon the president and Congress to pass legislation to protect the rights guaranteed to African-Americans by the 15th Amendment. Growing dissatisfaction with Southern discrimination resulted in many demonstrations, including the Selma to Montgomery March. In an address to both the House and the Senate, President Johnson called upon Congress to pass a strong voting rights bill.

Dole heard the president’s call. Working side-by-side with his Congressional colleagues, both chambers passed the necessary legislation. “An act to enforce the 15th Amendment to the Constitution of the United States,” the Voting Rights Act of 1965 prohibited states from denying any person from exercising his or her right to vote on the basis of race or skin color. Specifically, the act prohibited states from instituting voting requirements like poll taxes and literacy tests, which were previously used to prevent African-Americans from voting. It also provided an oversight provision: states that had previously employed voting requirements would be supervised by the Department of Justice. These states were also required to obtain permission from the attorney general to make any changes in the voting process.

Even in the Senate, Dole continued the fight for equal justice. Dole was a co-sponsor of the Voting Rights Act Extension of 1982. The extension provided a 25-year renewal of the original legislation and strengthened prohibitions against voting discrimination based on race.

As early as 1970, Senator Dole supported efforts to create a national holiday in honor of Rev. Martin Luther King Jr. Although his support put him at odds with many of his Republican colleagues, he co-sponsored S. 400 “A bill to designate the birthday of Martin Luther King, Junior, a legal public holiday” in 1983. A heated debate in the Senate ensued with Republican opponents enacting a filibuster against the legislation. Dole answered the opposition with the following remarks on the Senate floor:

“I would make a distinction in the fact that this has happened over my lifetime and I have watched the change taking place because I have been in Congress ever since the first time Dr. King demonstrated his effectiveness in pointing out discrimination and injustice in this country. I did not know Columbus and I did not know Franklin D. Roosevelt. When you have seen the dramatic change that has happened all across this land and other lands because of one man, because of his dream and his vision and his diligence and his commitment that really, as I see it, is what the debate is all about today.”

Under a motion for cloture, and two days of intense debate, the legislation passed the Senate with a vote of 78 to 22. The Martin Luther King Jr. holiday is observed annually on the third Monday of January around the time of King’s birthday, January 15.

Bob Dole on the campaign trail 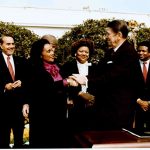 Bob Dole with President Reagan, Coretta Scott King and other members of Congress at the signing of the Martin Luther King Holiday Bill 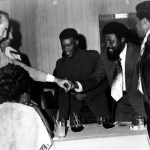 Bob Dole was a co-sponsor of the Voting Rights Act Extension in 1982, which provided a 25-year renewal of the original legislation