A champion of American ideals, Dole worked tirelessly to promote the rights of the world’s citizens. At times, Dole faced criticism from his party and constituents for supporting legislation that improved the lives of millions of people around the world. He never regretted it.

One of Senator Dole’s most dramatic encounters was with Nicaraguan President Daniel Ortega. Dole first spoke out against Ortega in 1986, accusing him of working with the Soviets and urging support for democratic resistance against the Sandinista regime.

In late August 1987, Sen. Dole traveled with four other senators to meet with President Ortega. The meeting quickly devolved into a public spectacle between Dole and Ortega as their debate was broadcast live over Voice of Nicaragua, the government-controlled radio station. Ortega refused Dole’s request for three-way negotiations with the United States and the Contras.

Despite their differences, Dole was successful in negotiating the release of two Nicaraguan human rights activists who were jailed after organizing a protest against Ortega. Dole continued his adamant support for the full restoration of democracy in Nicaragua:

“Freedom is our natural heritage, and a very important part of our international responsibility. We—the United States of America—we are the leaders of the free world. That is not just rhetoric. It is very hard reality.”

The sanctions of the Sandinistas and military aid to the Contras, supported by Sen. Dole, paid off. Ortega was ousted in 1988 democratic elections and President Bush moved quickly to establish full diplomatic relations with the new government.

Sen. Dole traveled with his wife, United States Secretary of Labor Elizabeth Dole, to communist-controlled Poland in 1989, just one day before the first democratic elections in 45 years. In his report back to Congress, Dole said, “We arrived in Warsaw on a historic and exciting day- the day that a great nation elected its first democratically chosen leader in more than half a century.”

“[He is] truly a hero, not only to Poles but to freedom loving people around the world.”

In their meeting, Walesa asked Dole for assistance from the United States to prevent a communist overthrow of the infant democracy:

“We have lifted the Iron Curtain but it is getting heavy. We need help.”

“I believe it is in our best interest, America’s interest, to take some additional step now on behalf of freedom in Poland. I believe we should send some additional, immediate signal of American support for the Mazowiecki government.”

In 2005, Walesa accepted the Dole Leadership Prize given by the Robert J. Dole Institute of Politics at the University of Kansas. This annual award is given to a group or individual whose leadership through honorable service has inspired others.

On the 75th anniversary of the Armenian Genocide, April 24, 1990, Sen. Dole issued a strong rebuke to the U.S. Senate for their refusal to declare a day of remembrance: “We have been taken in by the bluster and blandishments of Turkey’s high priced lobbyists. And we have caved into threats from large American companies who do lots of business in Turkey.”

The Armenian genocide occurred between 1915 and 1920, when more than 1.5 million Armenians were systematically killed in a campaign by the Ottoman Empire. To date, only 20 countries around the world have formally recognized the genocide. America still has not.

As a tribute to Sen. Dole’s long-standing dedication to ensure recognition of the Armenian Genocide, he was given the 2001 Freedom Award by the Armenian National Committee of America.

Republican Leader Bob Dole played pivotal roles in the months leading up to the Gulf War, both as a voice of reason in the Senate and as a trusted ally to President George H.W. Bush.

Dole led a delegation of senators to meet with Saddam Hussein on April 12, 1990. Arranged by President Bush, the meeting was to discuss allegations that Iraq was developing new chemical and biological weapons systems. Although Hussein insisted that his country was engaged in “pure scientific research,” he rebuffed Dole’s suggestion to allow Western journalists access to sites that were potentially involved in biological weapons production.

As chances for a peaceful resolution in Iraq faded, Dole issued clear and deliberate statements of his support for President Bush. Dole urged Congress to join him in sending a clear message to Saddam Hussein—that Congress stands firmly in unity with the President and will support his decisions.

“No one wants war. And no one abhors war more than those of us who have fought one.”

Sen. John Warner and Sen. Dole introduced a resolution authorizing the President to use military force. Still hoping to avoid war, both senators wanted the resolution to enforce sanctions that seemed to be ineffective: “There is only one thing that is going to get Saddam Hussein out of Kuwait, short of throwing him out. And that is if he believes we are going to throw him out.”

“When Americans go to war, we go to war together.”

Dole worked closely with Democratic Senate Leader George Mitchell to craft a resolution that would satisfy the differing viewpoints in the Senate regarding the president and the use of military force in Iraq. After nearly two days of debate, the Senate reached unanimous agreement to a resolution supporting the U.S. presence in the Persian Gulf, which stated, “Congress commends and supports the efforts and leadership of the President” and “unequivocally supports the men and women of our armed forces.”

As part of his continued support for Bosnia, Dole served as chair of the International Commission on Missing Persons from 1997 to 2001. Originally established as part of the Dayton Peace Agreement, the commission surpassed its original scope of work regarding the former Yugoslavia and is now involved in issues related to missing persons throughout the world.

In the years after the war in Bosnia ended, more that 27,000 people remained missing. Comparing the experience to that of Americans following the Vietnam War, Dole recognized the importance of being able to identify missing relatives and finally put them to rest:

“No project is as essential to reconciliation and peace as this one, which can bring closure to thousands of families who have been locked in the torment of the past and unable to move towards the promise of the future.”

In the week following the attacks of Sept. 11, Dole teamed with President Bill Clinton as campaign co-chairs for the Families of Freedom Scholarship Fund. Together they were able to raise more than $108 million to support post-secondary educational assistance to the dependants of those killed or permanently disabled in the 9/11 attacks.

Dole gave a national press conference on September 29, 2001 to discuss why this cause was so important to him:

“And I would just say it seems to me this can be a living memorial, and they will understand as they grow older, the young people, the children, that America continues to care. And we care long after the TV is gone, and long after you move on to the next event.”

Senator Dole was awarded the French Legion of Honor medal on November 17, 2005. This award, which dates back to the time of Napoleon, was given in recognition of Dole’s military service in World War II. During the ceremony Ambassador Jean-Davis Levitte also praised Dole’s role in the Dayton Accords bringing peace to Bosnia. 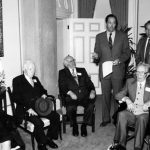 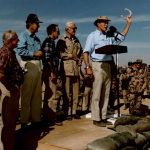 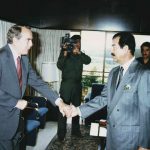 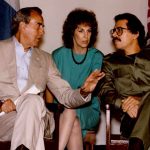 Dole with Daniel Ortega in Nicaragua