The National World War II Memorial was dedicated on April 29, 2004 to honor the 16 million veterans who fought during the war. During World War II, Dole served under the 10th Mountain Division in Italy as a platoon leader. He sustained severe injuries that left his right arm paralyzed throughout his life.

Dole led the WWII Memorial Campaign as national chairman. As a decorated veteran, he believed that a national memorial should honor the 16 million who served in the armed forces of the U.S. during World War II, the more than 400,000 who died, and the millions who supported the war effort from home.

Under Dole’s leadership, the project raised more than $197 million in cash and pledges. Construction began in September 2001 and was completed in April 2004. At the dedication ceremony, Dole spoke about the importance of remembering the sacrifices that were made and the importance of democracy:

“It is only fitting when this memorial was opened to the public about a month ago the very first visitors were school children. For them, our war is ancient history and those who fought it are slightly ancient themselves. Yet, in the end, they are the ones for whom we built this shrine and to whom we now hand the baton in the unending relay of human possibility.”

Senator Dole was awarded the Thayer Award in 2004 for his outstanding service to the nation.

The Sylanus Thayer Award is an annual award presented by the United States Military Academy at West Point.  Named after the fifth superintendent at the academy, the award was created to honor a non-West Point graduate who embodies the motto: “Duty, Honor, Country.”

The Thayer Award is currently housed at the Dole Institute of Politics.

On the morning of March 6, 2007, Sen. Dole and Secretary Donna Shalala were appointed to the President’s Commission on Care for America’s Returning Wounded Warriors. The commission was challenged with investigating the challenges faced by returning veterans.

In statement following the announcement of his appointment, Dole said the purpose of the commission was “to make certain that those young men and women who served are properly cared for when they come home and that they are properly transitioned after their care is completed.”

Dole’s appointment was made in recognition of his personal commitment and concern for the unique challenges faced by convalescing service men and women. As a soldier in World War II, Dole was severely injured and spent over two years recovering from injuries he sustained on the battlefield.

Sen. Dole’s background coupled with his stature in Washington D.C. made him well-qualified to investigate reports of abuse and neglect of veterans at Walter Reed Army Hospital. Dole responded to the allegation of abuse saying, “It is not fair.  It’s not fair to the families; it’s obviously not fair to the veterans. Our charge is to see if we can come up with some ideas that might correct that.”

After intensive study across the country, the commission offered their findings and recommendations to Congress on September 19, 2007. Sen. Dole continued his work on behalf of the Wounded Warriors Commission by helping veterans navigate the adjustments back to civilian lives.

Senator Dole has long been a committed advocate for veterans and their families. As honorary advisor of the Honor Flight Network, Sen. Dole worked closely with the program to ensure that American veterans are provided with the opportunity to visit the World War II memorial in the nation’s capital free of any personal cost to the veterans.

Sen. Dole often spent Saturdays at the World War II Memorial greeting veterans, swapping stories about their service and posing for pictures. “Mr. Dole was like a rock star. They gathered around to shake hands, to have their pictures taken with him to crack a joke about their ages,” said Gerald F. Seib of the Wall Street Journal.

In 2018, the Washington Post profiled the senator’s near-daily visits to the memorial. Of his conversations with his fellow veterans, Sen. Dole said, “I tell them it doesn’t matter where you’re from, what war you served in, whether you were wounded or not wounded. We’re all in this together.”

Earle Morse, a retired air force captain and physician’s assistant created this successful program. Morse worked in a Springfield, Ohio clinic run by the Department of Veterans Affairs. Morse noticed that veterans were not making the trip to see the Memorial dedicated to commemorating their service. Determined to do something about this he began personally flying veterans to the capital. The program expanded to include a volunteer program to fly veterans to their memorial.

According to the Honor Flight Networks website, the program has transported over 180,261 veterans of World War II, Korea and Vietnam to see the memorials built to honor their suffering and sacrifice.

“I truly felt like a hero for a day.” 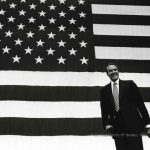 Dole in front of the American flag 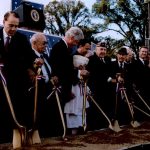 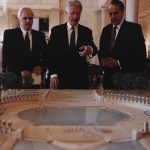 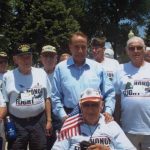 Dole with the Honor Flight Participants 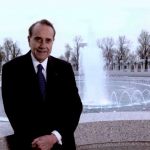