Fighting for Americans with Disabilities

“Mr. President, my remarks today concern an exceptional group which I joined on April 14, 24 years ago, during World War II.

“It is a minority group whose existence affects every person in our society and the very fiber of our nation.

“It is a group who no one joins by personal choice- a group whose requirements for membership are not based on age, sex, wealth, education, skin color, religious beliefs, political party, power or prestige.

“It is a minority, yet a group to which at least one out of every five Americans belongs.

“Mr. President, I speak today about 42 million citizens of our nation who are physically, mentally or emotionally handicapped.”

In an interview with ABILITY Magazine, Dole described the effect of his war injury:

“Experiencing a disability yourself, you could almost walk around with a blindfold and pick out the other people with disabilities…. Having a disability changes your whole life, not just your attitude.”

Throughout his life, Dole advocated for the disabled. In 1984, he founded the Dole Foundation for Employment of People with Disabilities. The inspiration for his charitable foundation came after a chance meeting with two severely handicapped teenagers. After speaking with them, Sen. Dole realized that without specialized help they would never have the opportunities to find work and live independently. The Dole Foundation raised millions of dollars and helped thousands of disabled people with job training and other employment services. In a 2000 C-Span interview, Dole counted the Americans with Disabilities Act (ADA) as one of his proudest achievements.

The road to the successful passage of the ADA was not an easy one. In June 1990, the bill seemed on the verge of unraveling as legislators hammered out a compromise, and one unhappy senator dubbed it “The Month from Hell.”

The debate was centered on two key points: the contentious Chapman Amendment and the question of how Congress itself would be affected by the act.

The Chapman Amendment was designed to protect restaurant owners from public fears about AIDS. Opponents of the amendment argued it violated the spirit of the bill, which was to end discrimination based on unfounded fears. Showing remarkable unity, the disabled community threatened to withdraw support of the bill if it included the Chapman Amendment.

During this time, Senator Dole commented on public misunderstanding of disabilities: “With some employers you have to go through this myth list with them and show them that persons with disabilities can be valuable employees.”

Through the continued pressure of the disabled community and the shift in many senators’ attitudes, the Chapman Amendment was defeated by a small margin in both houses.

The second controversial aspect of the bill was enforcing its application to Congress. The Senate rejected the idea that the House could wield enforcement power over it, and decided that the Senate would itself be responsible for Congressional adhering adherence to the new law. Also at issue was the question of private lawsuits against Congress violations of the ADA. Ultimately, the private right to action against Congress was upheld.

More than 3,000 people attended the signing ceremony on the White House lawn on July 16, 1990. As he signed the bill, President George H.W. Bush said:

“Every man, woman and child with a disability can now pass through once-closed doors into a bright new era of equality, independence and freedom… We will not tolerate discrimination in America.”

“This historic civil rights legislation seeks to end the unjustified segregation and exclusion of persons with disabilities from the mainstream of American life… The ADA is fair and balanced legislation that carefully blends the rights of people with disabilities…with the legitimate needs of the American business community.”

Dole had worked to realize these protections for 30 years. A landmark piece of civil rights legislation, the ADA decreed that “persons with disabilities ought to be judged on the basis of their abilities; they should not be judged nor discriminated against based on unfounded fear, prejudice, ignorance or mythologies.”

The Americans with Disabilities Act prohibits discrimination in public or private employment, in public buildings, and in places of public accommodation, like hotels and restaurants. The ADA introduced the new concept of nondiscrimination through reasonable accommodations, such as allowing guide dogs or making structural changes to allow wheelchairs. It also requires that qualified individuals with disabilities be accommodated in the workplace and in public. 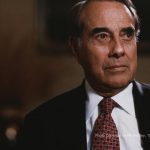 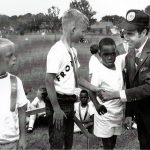 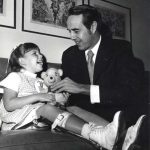 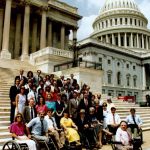 Bob Dole and Americans with disabilities on the Capitol steps 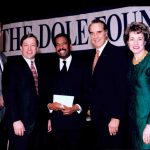 Bob and Elizabeth Dole at The Dole Foundation