Sen. Dole believed that agriculture was America’s most basic industry. In his 1996 biography (with wife Elizabeth), “Unlimited Partners,” he says “If you don’t eat, you don’t need to worry about the farmer. Otherwise, his problems are at least in part your problems too.”

As a 27-year veteran of the House and Senate Agriculture Committees, Dole worked on virtually every major piece of farm legislation during that time, but perhaps none was more important than the 1985 Farm Bill.

The booming farm exports of the 1970s had kept exports and prices high. However, by the early 1980s inflation and climbing interest rates put the American farmer in danger. Many were forced to abandon their farms and look elsewhere for work while a troubled nation did not understand why federal farm aid had quadrupled in less than ten years.

Dole, whose sympathies always were with the rural Kansas farmer, understood that cutting subsidies to farmers was completely unrealistic. However, the White House was seeking immediate reductions in costs. Sen. Dole led dozens of closed-door meetings that resulted in a five-year farm bill that that both cut costs and kept subsidies intact. He did what many thought was impossible—address the national deficit while protecting farmers.

Sen. Dole has placed domestic hunger and nutrition issues among his primary concerns for his entire career. Beginning in 1962, Rep. Dole supported expansions of the National School Lunch Program, ensuring that states were able to maintain needed funds for feeding children.

In 1969, freshman Sen. Dole gained seats on the Senate Agriculture, Forestry, and Nutrition Committee and the Select Committee on Nutrition and Human Needs, positions he used to influence many pieces of legislation dealing with food and nutrition issues.

Sen. Dole co-sponsored the Food and Agriculture Act of 1977, an omnibus farm bill, which included provisions on the federal food stamp program. Although he co-sponsored the bill, the Senator believed the program should be expanded even further, saying, “While the food stamp provisions in this bill contain many worthwhile reforms, I do not believe the bill goes far enough in ensuring that the truly needy are able to participate in the food stamp program. Accordingly, I shall introduce my own food stamp reform bill in the near future.”

Working with Sen. George McGovern, Dole introduced bipartisan legislation that completely reformed the food stamp program—encouraging the truly needy to benefit while making it harder for individuals to abuse the system. Dole continued to defend the food stamp program through 1980s, fighting within the Agriculture and Finance committees against cutbacks in program funding.

McGovern and Dole would later team up to tackle another hunger issue. The two Senators conducted field hearing across the country where they saw firsthand evidence of malnourished mothers, underweight children and the health and development repercussions of inadequate nutrition. Based on this evidence they worked together to create the Special Supplemental Nutrition Program for Women, Infants and Children (WIC), a federal assistance program for low-income pregnant women, breast-feeding women and children under the age of five. WIC is still in operation today and is responsible for feeding over 8 million women and children each year.

Both Senators fought to protect and expand the National School Lunch program throughout the 1970s, at one point forcing the Secretary of Agriculture to restore a program that allowed school officials to provide free lunches to students who are victims of emergencies or urgent hardship.

In 1983, while serving as chairman of the Senate Subcommittee on Nutrition, Dole recognized the continuing problem of hunger in America, saying, “While our agricultural surpluses provide ample evidence of this nation as a major world food producer, it’s intolerable to most Americans that some people are going hungry in this land.” Sen. Dole capitalized on these surpluses through the Temporary Emergency Food Assistance Act, a bill that created a system allowing the Secretary of Agriculture to distribute food surplus to local recipient agencies that serve the food needs of low-income and unemployed persons.

Dole’s concern did not end there. In 1991, when a deadly tornado ripped through southeast Kansas, he pushed for and got emergency food stamp assistance for residents in those counties in record time – just four days. Just two years later, when severe flooding occurred in the Midwest, he did the same for its residents.

“America must do everything in its power to ward off the tragedy of world hunger that threatens.”

Sen. Dole’s interest in combating hunger was never limited to just the United States. In 1966, Rep. Dole introduced an amendment to the landmark Food for Peace Act that called for volunteers to train farmers in developing countries. These volunteers would be known as the Bread and Butter Corps, and would “coordinate and accelerate the export of America’s most valuable product—our farm ‘know how’ and ‘show how.’”

The Bread and Butter Corps was a relief program that was consistent with Dole’s belief that those in need should be provided with the skills and technologies to better provide for themselves.

Rep. Dole was subsequently appointed as an advisor the President’s delegation to study the 1966 food crisis in India. After seeing near-famine conditions, his support for food aid was unequivocal. “At a time when people are facing starvation, we have only one choice, and that is to act very quickly and promptly.”

After his many significant achievements in fighting hunger domestically, Sen. Dole turned his attention once again to the global problem of hunger in 2002. Working with Sen. George McGovern, the two retired Senators created the McGovern-Dole International Food for Education Program (FFE). This program was considered an innovative new model of food aid, combining food commodities, cash, and technical assistance to carry out its program.

Dole and McGovern recognize that hunger is a major contributing factor in the cycle of poverty. Studies have show that hungry children have problems learning and malnutrition can lead to stunted development. The Food for Education Program seeks to break that cycle by providing meals for hungry children at school. As a result of the FFE program school enrollment has risen 14 percent overall and 17 percent for female students.

Dole and McGovern were recognized in 2008 with the prestigious World Food Prize. This award, known as the “Nobel Prize for Food and Agriculture,” was given in recognition of their “inspired, collaborative leadership that has encouraged a global commitment to school feeding and enhanced school attendance and nutrition for millions of the world’s poorest children, especially girls.”

Over 22 million children in 41 countries have been provided meals through FFE. 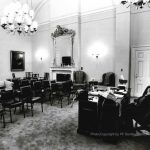 Dole in his office 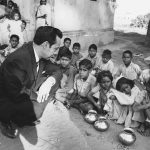 Dole in India among children 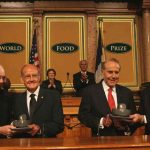 Senators Dole and McGovern are awarded the World Food Prize