Bob Dole understood that no doors should be closed to women. Leading by example, Dole staffed his Capitol Hill office with strong women that contributed to his success.

As Senate Majority Leader in 1985, Dole appointed the first woman to serve as Secretary of the United States Senate, Jo Ann Coe. Coe went on to hold many influential positions in the Dole office, being called the “unseen power” of Dole’s 1996 presidential campaign in an article by the New York Times. Senator Dole constructed a tribute to her inside the Dole Institute of Politics, which acknowledges Coe as “a public servant of uncommon integrity and dedication.”

As chairman of the Republican Party in 1971, Dole appointed Anne Armstrong, the first woman to serve as a party co-chairman.

Dole was the first Senate leader in history, Democrat or Republican, to have a female chief of staff. Sheila Burke, appointed in 1985, served as Dole’s chief of staff for over 10 years. Upon Dole’s retirement in 1996, Burke became Executive Dean of the Kennedy School of Government at Harvard University.

Sheila Bair served as Dole’s research director, deputy counsel and counsel for seven years. She went on to serve as the Chairman of the Federal Deposit Insurance Corporation and was named by Forbes magazine the second most powerful woman in the world (after Germany’s Chancellor Angela Merkel).

When he left the Senate, Dole’s staff included women who were his top advisors in issues ranging from taxes to health care to foreign policy. If Dole had been elected president, his wife Elizabeth Dole would have become the first First Lady in history to work outside the White House.

Sen. Dole led the battle to protect women from violent crime. In 1991 Dole introduced the Women’s Equal Opportunity Act, which enhanced the ability of law enforcement authorities to combat violence against women and established a federal monetary remedy for sexual harassment. Two years later he introduced the Sexual Assault Prevention Act, which makes it easier to convict repeat rapists, requires mandatory testing of alleged rapists for HIV, and increases penalties for repeat offenders.

Dole supported the 1994 Violence Against Women Act, legislation that included dramatically increased penalties for those accused of committing violent and sexual crimes against women. This legislation also included a large appropriation package to aid in the investigation of crimes against women, money which was nearly lost from the final bill, only to be rescued by Senator Dole through a compromise negotiation.

Bob Dole played a role in advancing the rights of all people during his time in the Senate. The Equal Rights Amendment, an amendment to advance the rights of women, came before the Senate on March 22, 1972.

“Section 1. Equality of rights under the law shall not be denied or abridged by the United States or by any State on account of sex. Section 2. The Congress shall have the power to enforce, by appropriate legislation, the provisions of this article. Section 3. This amendment shall take effect two years after the date of ratification,” the ERA text stated.

The ERA received 84 yeas, eight nays and seven did not vote. This granted Congressional approval of the ERA and gave the states seven years to ratify the amendment. “It simply allows a woman to pursue the career and activities of her choice, without undue discrimination on account of sex, ” Dole said of the effects of the ERA. “It does not force a woman to participate in activities which she does not choose to take on.”

Dole was among the 84 who voted for the Equal Rights Amendment in 1972 to create the potential 27th Amendment of the U.S. Constitution. “I feel this amendment will allow women the opportunity to make choices about their futures,” Dole said.

The State of Kansas ratified the ERA, but later lawmakers tried to rescind the state’s ratification of the amendment. The movement to rescind ratification was killed on February 10, 1975 by the Federal and State Affairs Committee of the Kansas House. 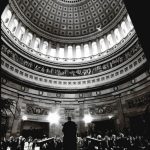 Dole speaking in the Rotunda 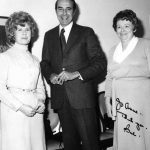 Bob Dole with Jo Ann Coe (on right). She was the first woman to serve as Secretary of the United States Senate 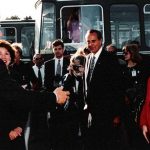 Dole with Sheila Burke and President Bill Clinton. Sheila was the first female to serve as Chief of Staff under a senate majority leader 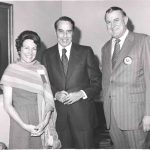 Bob Dole with Anne Armstrong, US diplomat and politician and first female Counselor to the President, under Ford and Nixon